SONY Kick it! Gets out there 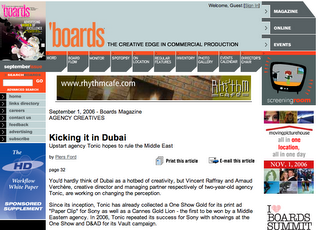 I just got some good news today. Apparently the SONY Kick it TVC is getting some excellent reviews in the Media. Here are the latest comments from Boards magazine. I’m looking forward to get some reactions on the forthcoming two new TVC’s that were shot in South Africa just two weeks ago.

“You’d hardly think of Dubai as a hotbed of creativity, but Vincent Raffray and Arnaud Verchère, creative director and managing partner respectively of two-year-old agency Tonic, are working on changing the perception.

Since its inception, Tonic has already collected a One Show Gold for its print ad “Paper Clip” for Sony as well as a Cannes Gold Lion – the first to be won by a Middle Eastern agency. In 2006, Tonic repeated its success for Sony with showings at the One Show and D&AD for its Vault campaign.

Still, Raffray says getting good work done in the Middle East is hardly an easy victory. There isn’t a well-established production infrastructure in Dubai, necessitating shooting abroad, and the youth market is a bit of a cultural desert with creative outlets like theatres being outnumbered by malls.

So why then would a South African and Frenchman set up shop in such an inhospitable environment? Opportunity. The larger agencies had bought a local presence without really trying to understand the market; Tonic could offer a more customized approach as a consultant rather than simply an agency, intending on doing so on a global rather than local level. And after four years in Dubai, the time seemed right.

The first year wasn’t easy, though. “We worked hard to develop some proactive print campaigns and sell our way of thinking. Now we want to do the same for film,” says Raffray, noting he’s focused on becoming the first agency in the region to win a Cannes Lion for film.

“Kick”, a South African-shot spot for Sony directed by Adrian De Sa Garces of Velocity for some African and Middle East regions, featuring a television subjected to some skilful drop-kicking, is a great start.

“We had a very small budget, but it is simple and clever,” says Raffray, noting the agency has two more Sony spots in production. “It’s helped to establish us as a creative brand with fresh ideas. We learn as much as we can about the client, and we buy into their thinking rather than try to sell them something they don’t understand.”

A client like Sony has also helped Tonic’s founders find their place in “the wild west of advertising” and has had a hand in shaping their future. “I only came for a year; I thought I would commit creative suicide or go back with a good book,” says Raffray. Somehow we think he’s glad he stayed.

The art of snapchatting in Saudi Arabia

A status review of Online Shopping in the UAE

Say hello to the chatbot